The Reveal
Hello PMB friends, this is Michelle here today with a card to share. When I was looking at all the super cute elements in this month's Tea for Two kit, I was imagining teapot shaped windows popped up over the colorful patterns of Cosmo Cricket's Mini-Deck papers. I tried to recreate what I envisioned. It turned out to be a great way to use up those tiny scraps of papers leftover from other projects. 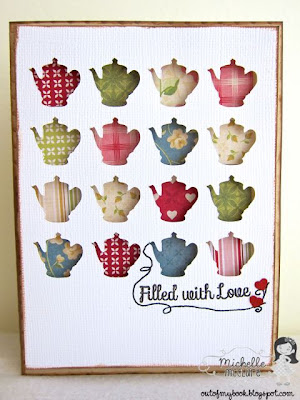 The front panel casts some nice shadows on the patterned papers and adds some dimensionality to the teapots. 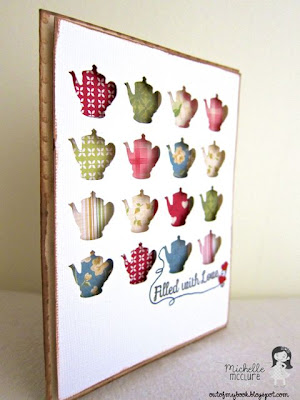 The Details
I stamped the teapot image from Sweet Stamp Shop's clear stamp set and scanned it into my computer. I opened it up in Silhouette Studio Designer Edition and created a cut file with 16 mini-teapots. This is actually the first time I tried this technique and it was quite easy to do. If you don't have the Silhouette Cameo, just use any die cut system. You can even use hand punches and just create one row of shapes. The main point is to have fun playing with the negative space leftover from the die cut instead of using the die cut pattern itself. 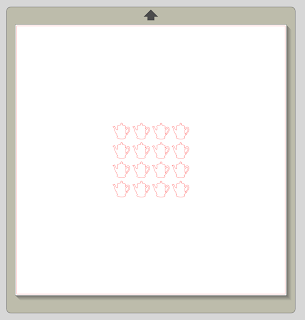 I ended up with a panel of teapot windows which will be the top layer. For the bottom layer, I cut sixteen .75 x .75" squares and adhered it to my card base. It will look like a patchwork quilt. 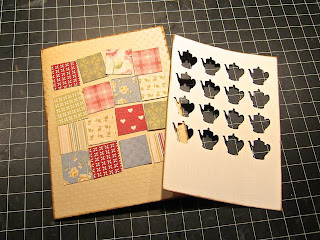 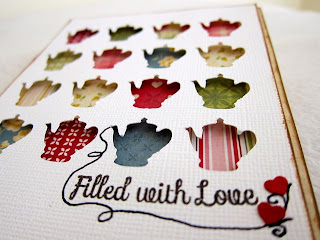 I added foam squares to the back of the teapot panel and layered it over the quilt squares to complete the card. 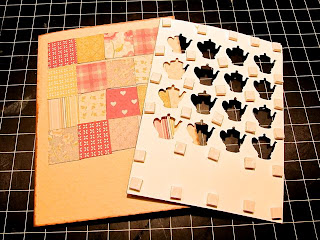 If you were wondering about the little teapots die cuts, don't worry, they will be put to use. So come back next Wednesday to find out their fate.

Thanks so much for stoppin' by!