The Reveal
Hello PMB friends! This is Michelle here today with my last creation for the month using April's Walk on the Bright Side kit. I just love all the fun Lawn Fawn elements and all the cute matching embellishments. I realized I hadn't even touched the buttons in the kit this month, so I layered them with a few stamps and circle punches, and I still have some buttons leftover. Here is a colorful card with a handwritten note on the front postcard, and a magical floating pop-up sentiment on the inside.


You can leave the card opened and have the sentiment as the display.

The Inspiration
I was at a local Korean bakery and saw this candle pack which I thought was so cute. I wanted to find a way to replicate them on my card. I wanted the candles to be sticking up, in a 3-D manner like on a cake, instead of glued flat on the card base. 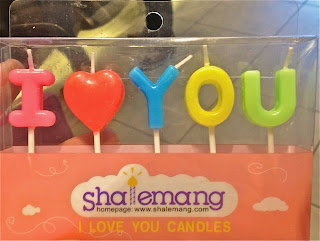 The Tutorial
I placed some paper scraps on my Cricut mat and cut out my letters and heart. I used the Plantin Schoolbook cartridge with 1.25" cut size, and I cut each image twice. You can also use your Silhouette Cameo or any other letters that you have lying around. I used my Cricut instead of my Cameo since it was for a  few single letters instead of words that I wanted joined together. 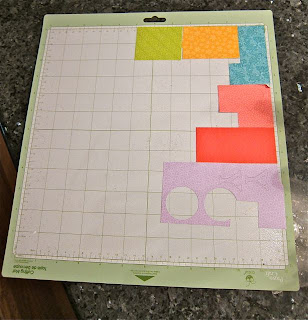 I glued the same letters together, back to back, with a sliver of acetate in between the two layers. 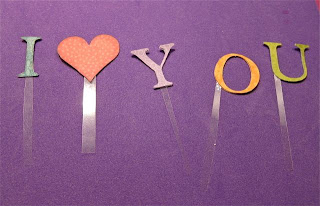 The front and back of the card are two separate pieces with an extra .25" at the top that is folded. You can make your card any size, my card base is 7 x 4.25", which folds into 7 x 4". You'll need two pieces cut into the same size. 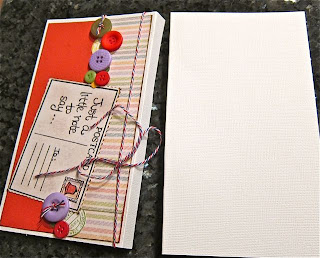 Glue the .25" strips at the top of the cards together, wedging the acetate strips in between. This will make them pop-up when you open the card. You'll end up with a .25" strip in the middle of the interior of the card. I covered that strip by adhering on some border punches. 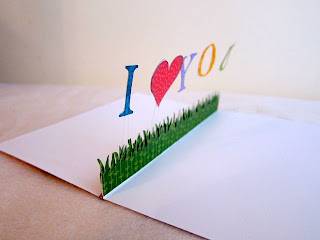 You can float any image, like clouds would be cute, or any other sentiment. Just be creative and be inspired by all that surrounds you.

Thanks so much for taking a walk on the bright side with me.